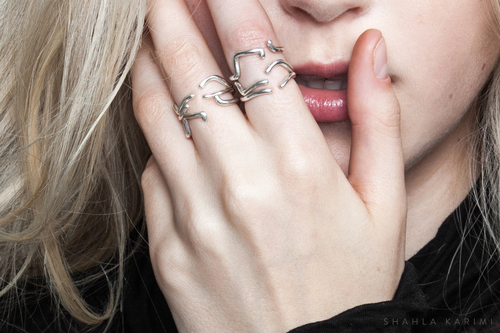 Shahla Karimi creates pieces with very organic lines. The Subway Series pieces are very unique with pretty curves. Those cuves/lines (and entire collection) are formed by curving NYC subway lines around the finger, the subway series focuses on the transit lines between some of NYC’s most recognizable neighborhoods and landmarks.
The Subway Series set of 3 rings is so good as you can wear the rings any way you’d like, stacked or separately.
The rings stand for  three unique routes—Inwood to World Trade Center, Yankee Stadium to Wall Street, and Harlem to South Ferry.

The subway lines which have been turned into rings. On the left: First Subway Series, on the right New Subway Series Fine.
The first fine collection is an expansion of the original Subway Series, a collection formed by curving NYC transit lines between some of the city’s most iconic locations which you can see on the image/map above.

[All images via Shahla Karimi]