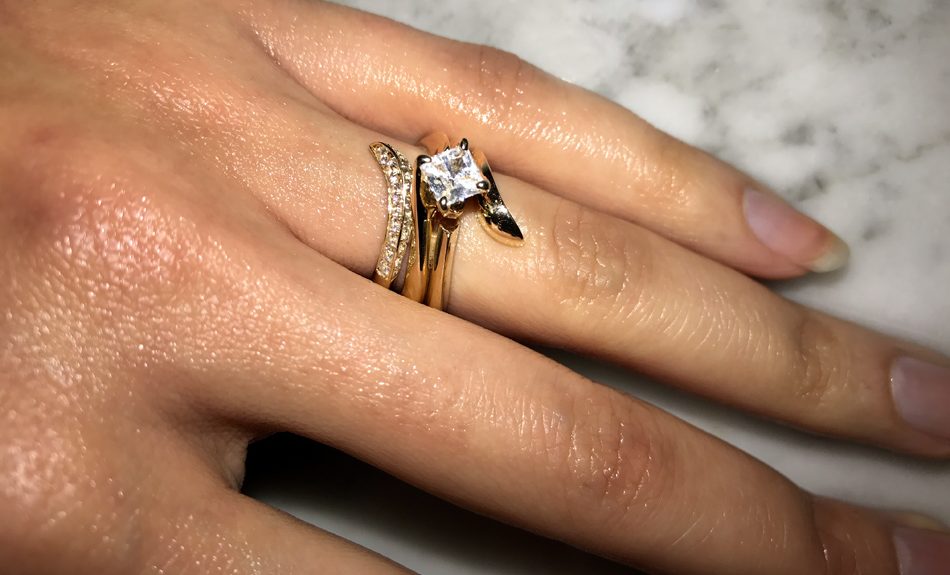 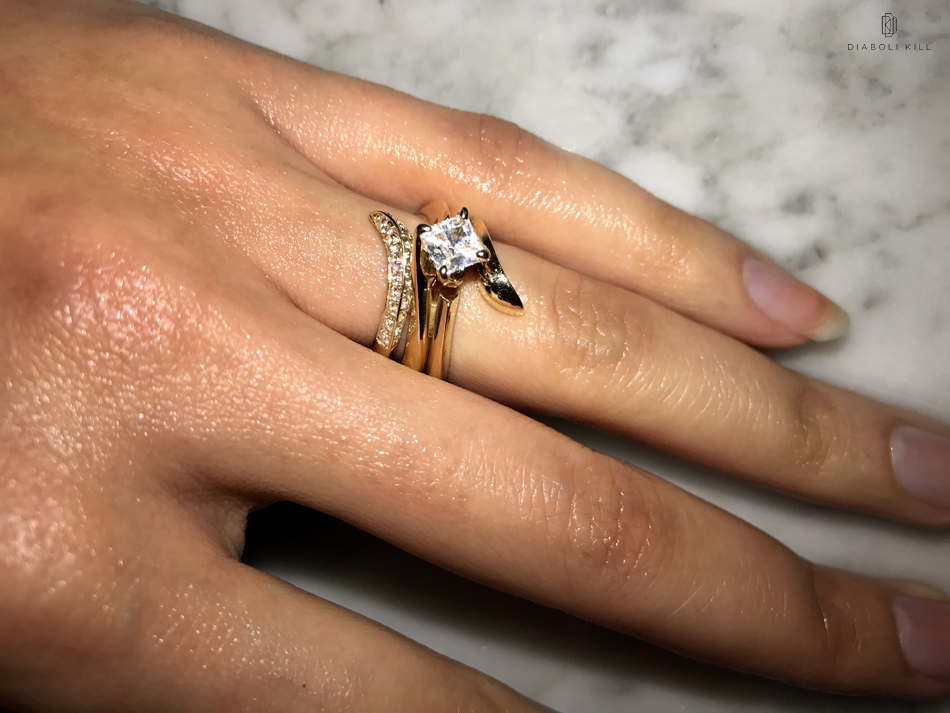 As soon designer Angie of Diaboli Kill released her newest collection a little while ago, I got instantly lovestruck. Even this much it’s too little for words. But I can guess you get me on this, so keep reading and scroll down for more prettiness!
The Pythia Princes Cut Solitaire Diamond set makes me swoon. It’s an amazing set of three interlocking rings hand crafted 18-karat yellow gold to resemble a coiled serpent – used as a symbol of sovereignty, royalty and divine authority in ancient Egypt… yup, I even love the story behind it and even how Angie came up with this design! 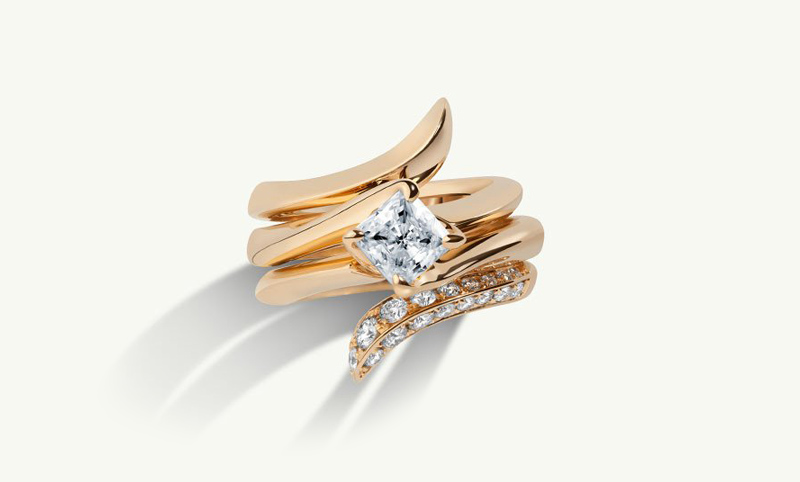 Angie happened to design the Phytia ring while at a restaurant in Portugal. She saw it in her head and drew it on the paper table cloth. I’m so glad she did!

Inspired by the story of Adam, Eve and the serpent, this ‘Pythia’ yellow gold solitaire engagement ring twists in a sculpted form that elegantly wraps around embracing a gorgeous princess cut 0.50 carat white diamond. Together with a solid yellow gold band and a 0.30 carat pavé diamond band totaling 0.80ct. When viewed from the side, the three stacked rings resemble a delicate flower. 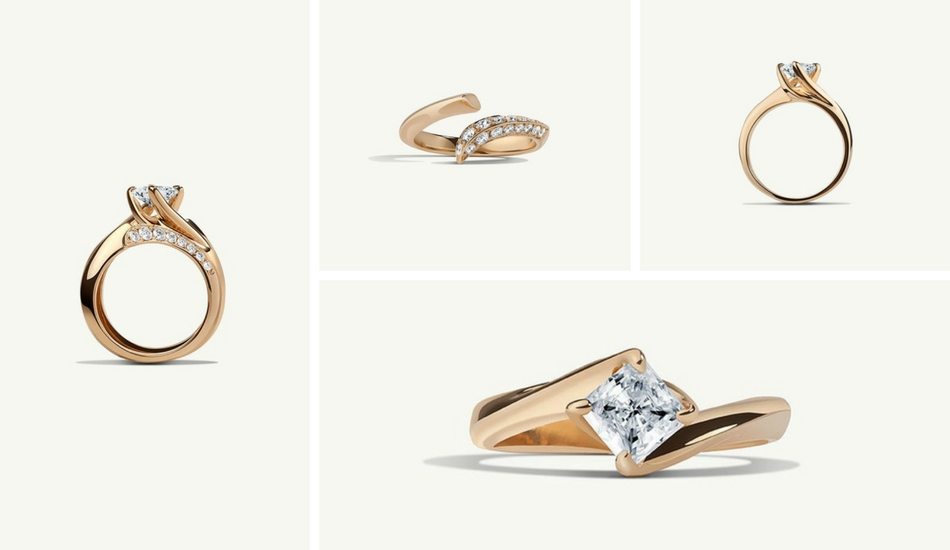 Angie about her inspiration: 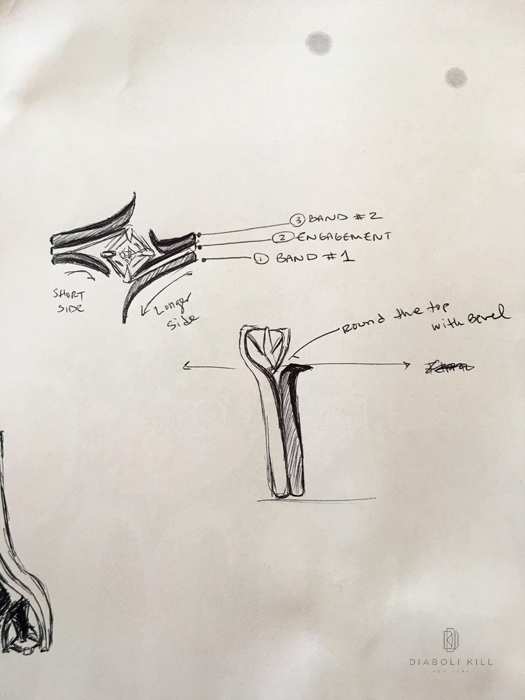 I wanted to create a ring that resembled a snake wrapped around the finger holding a diamond. I had this idea to do a stackable ring so you could customize it or wear them separately. For weeks I was trying to figure out how the rings would work together to become one. Then one day while I was on vacation in Portugal, sat outside having lunch my husband was talking to me. And something he said must have triggered a vision in my head, because immediately I saw it, in my mind, how the ring looked like. It was a snake that turned into a beautiful flower. I didn’t have my sketchbook with me so I asked the waiter to let me borrow his pen and I drew my vision on the paper placemat that was under my plate. You can even see some olive oil grease marks on the paper! 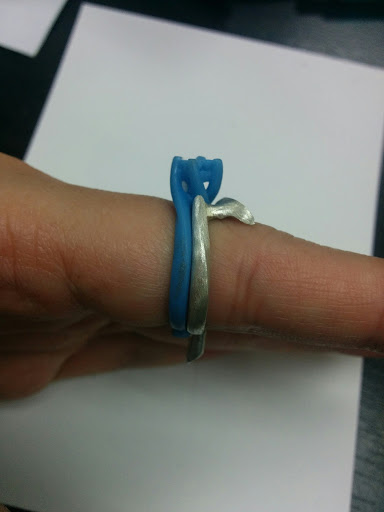 I named the ring “Pythia”, after reading about the ancient Greek mythological priestesses of Delphi who delivered oracles, also known as the Oracle of Delphi. It was believed that these chosen women channeled prophecies from the god Apollo himself, while steeped in a dreamlike trance. And because the ring design was initially inspired by serpents, the name ‘Pythia’ derives from the older Greek name of Delphi which was Pythios. And in classical and Greek mythology it was a python (also derived from Pythios) who guarded the chasm at Delphi in which prophetic vapors emerged.

Since most of my ideas for designs mostly come to me in a sort of spiritual way as visions, I thought to give the name ‘Pythia’ to this special ring was a perfect touch.

All images and info thanks to/by Diaboli Kill