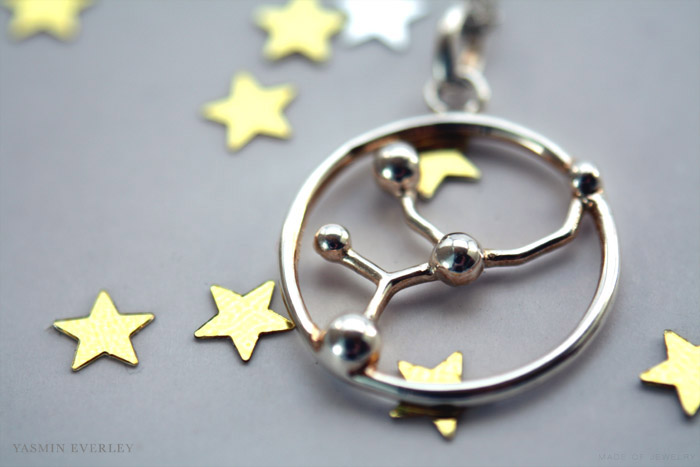 Recently I treated myself with a kind of more personal piece by Yasmin Everley. She has this Astrology Collection so I thought I should get myself a necklace. Which I did.
Yasmin had announced earlier her pieces are sold via Boticcaa As I never had purchased through that platform, I gave it a try. Success!
Now I wear my Virgo Astrology necklace almost every day.

Each piece of the collection takes the form of a circle, which the Ancient Greeks considered the most geometrically perfect shape. The circle holds a cluster of the stars, accurately forming the constellation, which is held suspended in space by delicate wire.

My Virgo necklace came with a little card telling the myth behind the constellation:
In the Ancient Greek tale, Virgo is associated with the story of Demeter, the goddess of harvest, and her daughter Persephone. While Persephone was out gathering flowers, Hades abducted her and made her his wife. In her grief Demeter caused all the harvests to fail until Hades agreed to give her back for half the year and so the seasons were created.

[All images by Made of Jewelry]