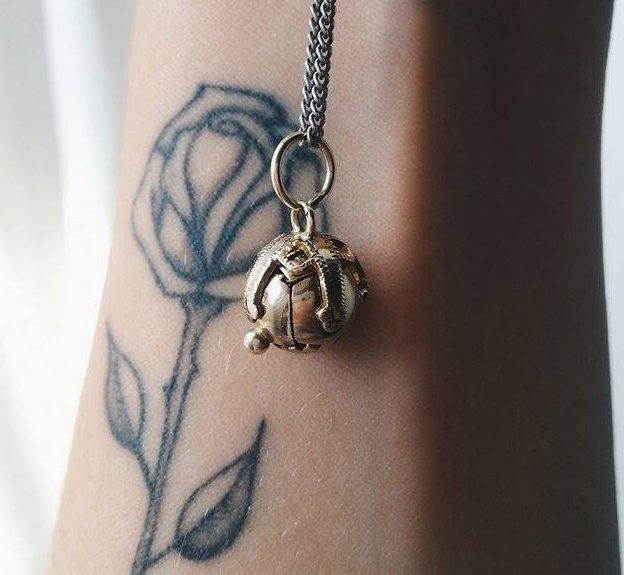 I have been looking for a Masonic orb pendant ince two years now. Not that these pendants are rare, but they can be quite pricey. Finally, with some patience, I have found one which perfectly fitted my budget.
Couldn’t be more happy with it!
Masonic ball pendants, also called Masonic orbs are highly prized as Masonic collectibles.
Now you maybe might wonder the story behind Masonic balls and what’s so fun about them:
When pocket watches were in fashion they were generally secured by a chain that attached to the owner’s waistcoat and the end of the chain was often decorated with a charm or fob. Freemasons could choose a fob that could discreetly display their membership, such as a set square and compasses or a Mark Masonry keystone. However one of the most intriguing designs was that of the masonic ball fob. The most commonly seen examples date from the late 19th century but ball fobs are still in production today. The masonic ball fob at first sight appears to be a simple gold metal sphere with four hinged clasps holding it from the attachment loop at the top. However if the clasps are released the ball itself opens up, forming a cross-shape of six equally-sized pyramidal segments, each of the four pyramid faces bearing a masonic symbol.

The placement and exact variety of symbols on the faces of the exposed pyramids varies between
individual ball fobs. First reading from left to right, then upper and finally lower. Many of these symbols use the tools of stonemasons to represent moral values which is a key
element of freemasonry.
The top square for example reads: Gavel (refining the individual, control of passions), Five-pointed or Blazing Star
(numerous interpretations, including the five points of Masonic fellowship), Six-pointed Star (Seal
of Solomon), Set Square (the proper balance between different values and qualities).

My pretty little fob, which is a 9ct Yellow gold & silver ball, has the maker’s initials J.H.W. on the clasp and also stamped “MADE IN ENGLAND” which show this to be early 20th century (1900 – 1930). It weighs around 3.2 grams.
Masonic balls are availble in Small, Medium and Large. Whatever size you like best, you’ll find each of them easily on eBay and on online auction websites such as Fellows.